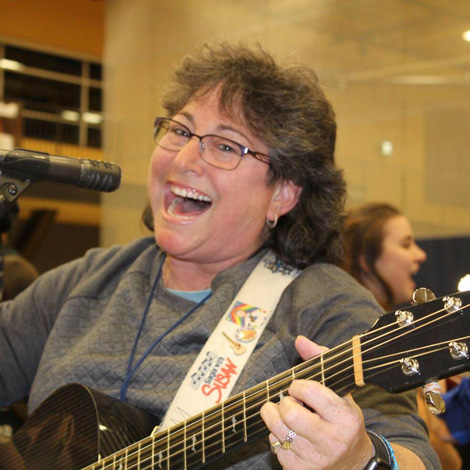 Susan Shane-Linder is a Miami-born AWARD-WINNING, published singer/songwriter and children’s recording artist. She has been performing professionally and teaching music for 40 years and is well-known throughout South Florida in pre-schools, elementary schools, summer camps, book stores, record stores, hospitals, retirement homes and many other organizations. She has been a featured entertainer for Pottery Barn for Kids Concert Series. She is currently associated with Congregation B’nai Israel in Boca Raton, Florida, and formerly of Temple Beth Am, and The Dave & Mary Alper Jewish Community Center, both in Miami, Florida. Susan has taught thousands of children. Some of them have grown up to be Rabbis, Cantors, Doctors, Lawyers and other prominent people in their communities.

Susan presents workshops and performs around the United States and previous engagements include Carnival Cruise Lines and Walt Disney World in Florida. She can frequently be found entertaining people of all ages throughout the tri-county area. Birthday parties for children 1-7 years of age are a town favorite. She was nominated for a 2009 Nickelodeon Parents’ Picks Award for best party entertainer in Miami/Ft. Lauderdale, and in 2010, she WON that award. In January of 2012, she won the Gerald Legow Outstanding Achievement in Jewish Education Award. This is otherwise known as “Teacher of the Year”. Susan is very active in education and presents children’s music workshops around the country, most notably at the JCECE (Jewish Council for Early Childhood Education), Palm Beach County JEC (Jewish Education Commission), NAEYC (National Association for the Education of Young Children), CAJE (Coalition for the Advancement of Jewish Education), MANAJE (New CAJE), NewCaje, Songleader Boot Camp (SLBC), WCN (Women Cantors’ Network), JKids Radio (formerly PJ Library Radio) and Limmud UK.