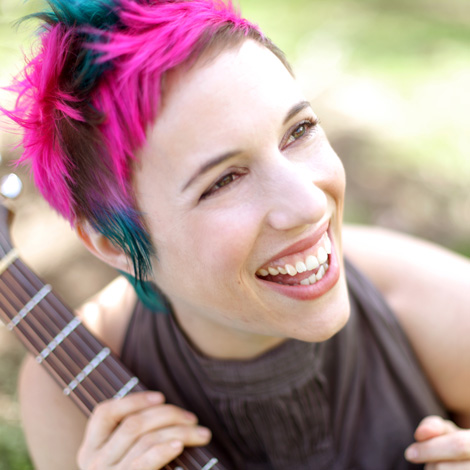 ShirLaLa is an internationally acclaimed, award winning performing and ritual artist recognized as a “revolutionary educator” and named one of the “new re-engineers of Jewish life.” She has been a featured PJ Library artist since their launch in 2006. Shira tours extensively performing for families, adults, and teens in the United States, stages in Israel, England, Italy, Australia, New Zealand, and most recently in South Africa. The product of a modern rabbi and a modern dancer, she blends words, story and music to create a rich experience for children and adults alike. Her ShirLaLa Jewish kiddie rock albums along with her parent and teacher resource center, “Blog Sameach,” are featured worldwide.

On the road, Shira works with a diverse array of Jewish communities to enliven rituals, holiday celebrations, and love for Jewish life and prayer. She works with national organizations across the denominational spectrum facilitating professional development seminars on early childhood music and creative worship for educators, seminary students, clergy and lay leaders. She works closely with the Early Childhood Educators of Reform Judaism, the URJ’s Hava Nashira, and is adjunct faculty for the HUC-JIR Debbie Friedman School for Sacred Music. In New York City, Shira is a founding co-creator of Storahtelling and Lab/Shul with which she is the Director of Family Education as well as the Director of Worship.

On days off you’ll find Shira playing music with her friends, exploring far away places, and cooking up a storm.