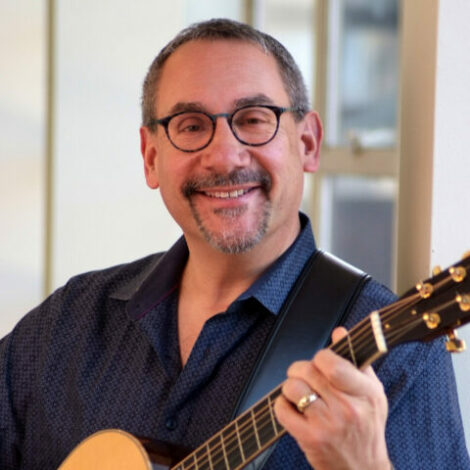 Rabbi Joseph Black has served as Senior Rabbi of Temple Emanuel in Denver, CO since July 2010. He is a nationally recognized pioneer of Jewish contemporary music and has recorded 6 albums of original Jewish music, including Praying With Our Feet (2022), his first album of new original music since 2003.

Rabbi Black is also an accomplished writer and poet; he has published several poems and articles in leading national literary and academic journals. He is a frequent contributor to anthologies and collections of Jewish writing. Two of his songs, “Boker Tov” and “The Afikoman Mambo,” have been made into Children’s books and distributed by the PJ Library. His most recent book, There Once Was A Man From Canaan: The Five Books of Limerick, is a collection of Limericks based on each torah portion. He has performed his original music in many communities in the United States and Canada and has received numerous honors for his performance and composition.

Rabbi Black’s recordings and books have received accolades from sources as diverse as The New York Times, Haddasah Magazine, Parent’s Choice, The American Library Journal and Kids First: The Coalition for Quality Children’s Video. As a musician, Rabbi Black is known for his guitar virtuosity, soaring voice and lyrics that are at the same time, funny, inspirational and thought provoking. His music is an extension of his Rabbinate.

Rabbi Black previously serving as Rabbi of Congregation Albert in Albuquerque, New Mexico from 1996-2010. He served as Assistant and then Associate Rabbi at Temple Israel in Minneapolis, Minnesota from 1987-1996. He received his Bachelor’s degree in Education from Northwestern University in 1982 and his Master’s degree and Rabbinic Ordination from the Hebrew Union College – Jewish Institute of Religion (HUC-JIR) in Cincinnati, Ohio in 1987. In 2012 he received an honorary Doctorate of Divinity from HUC-JIR.